Jay Israel is a Zimbabwean born pastor and founder of Spirit Life Mega Church based in South Africa.

The founder of Spirit Life Mega Church based in South Africa Jay Israel has survived a horrific car accident.

According to Jay Israel the accident took place after being followed by a very suspicious car that eventually hit his car from behind.

After being followed by a very suspicious car that eventually hit us from behind and the car spinning 5 times into a tree by the roadside .I’m sure they were hoping the car would roll into a ditch and probably explode but God said no.

A miracle is when those planning to assassinate becomes the victims . The car that hit us from behind got damaged beyond repair . THATS GOD 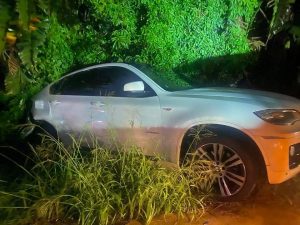 After being followed by a very suspicious car that eventually hit us from behind and the car spinning 5 times into a tree by the roadside .I’m sure they were hoping the car would roll into a ditch and probably explode but God said no.

A miracle is when those planning to assassinate becomes the victims . The car that hit us from behind got damaged beyond repair . THATS GOD !!

Jay Israel recently revealed that he is quitting Christianity.

He left the ministry after spending two years fighting depression.

He was born Jacob Dube in Zimbabwe.[1]

Love Life
In 2017, Israel engaged Benene Bee but the two parted ways barely three months after the announcement of their engagement. Jay Israel parted ways with his lover over infidelity claims. He had even paid lobola.

After his split with Benene, Israel started dating Khanya Mankayi whom H-Metro reported he was set to marry.[2]

Career as a Pastor
He said he started a church in Harare at the age of 18.[3]

Israel burst onto the scene in 2016 following the launch of his church at the garage of his former personal assistant in East London, South Africa.

He soon got tongues wagging for making bold claims of healing people with miracle powers. In 2020 he posted a video on YouTube confessing that all the miracles he had performed were staged and that he had paid actors.[4]

Controversies
Joining A Cult
Jay Israel revealed details of how he used dead pigeons, red towels and a horn to gain power, wealth and popularity while running a cult at his church.

Appearing before the Commission for the Promotion and Protection of the Rights of Cultural, Religious and Linguistic Communities (CRL Rights Commission) in November 2020, Jay Israel gave an account of how, when he joined a cult in Benin, he believed he was able to prophesy and make people do what he wanted them to do.

He also revealed how he joined a cult after he met a man from Ghana through Facebook who promised to help him grow his church.

After a ritual for protection process which included sleeping in a room with sculptures smeared with blood, getting cut by a razor blade and having a black substance rubbed onto the cuts, being washed with water mixed with leaves and having dead pigeon blood smeared all over his body, Jay Israel was introduced to the god that he would be worshipping.

He was told the name of the god was Atiovi.

The following day they went into another room where this god was. He said there was a lot of blood in the room. Jay Israel was told to kneel and bow down before the god. He was also told what to say to the god.

After the initiation was done he said he was given a bighorn which he kept in his bag. He said the horn was covered with a red cloth and had a head which contained a substance. He was told to use the horn before his church services.

They said when you go back to your country, you must make a sacrifice to the god [the horn] before you go into a church service. They said you kill a pigeon or chicken and take its blood and smear it on the horn. I was told to take gin and spit it on the head of the horn and say the words and lick it [blood] with your tongue.

He said after his return from Benin he would conduct “Do as I say services” when he started a church in East London.

Jay Israel said he would use a red towel to get people to give him whatever he wanted. He said:

He used certain words to control crowds at church which his followers thought was him speaking in tongues. He would use bible scriptures to make people give money to the church. He would deceive his followers into believing that if they did not pay tithes, they were robbing God. [3]

Intimidation Case
In July 2020, South African police said they were looking for Jay Israel. He was accused of making death threats to his former public relations officer and labour lawyer Tabisa Ralawe.

Ralawe had a fallout with Israel after exposing his fake prophecies. She said she was offered a job by Israel in 2017 after she helped him counter a social media attack his church found itself under over a controversial event it planned to host.

She said Jay Israel never paid her for the work that she did for him. Ralawe left because of non payment and said when Jay Israel was attacked on social media she also commented and this angered the controversial pastor.

Ralawe said she received death threats and would find the tyres of her car slashed or hammered with nails in East London. Her son’s photos were splashed over social media on fake accounts she believed were opened by Jay Israel.

A video of him and Blessing Mashangwa who had taken Makandiwa to court with her (then) husband Upenyu Mashangwa over alleged false prophecies, surfaced online.

He also claimed that Makandiwa had joined a cult in Ghana and said that was the reason why he no longer did altar calls or baptisms at his church. Jay Israel also said Makandiwa has been performing fake miracles such as the Miracle Baby. [1]