Fans were left unsure as to whether to continue flooding singer Zandile Khumalo with congratulatory messages after she shared the news that she and her husband Mhlo Gumede are expecting a baby and later deleted the post.

The singer recently shared on Instagram that she is pregnant with a faceless snap of a baby bump. The alleged mama-to-be said she was close to welcoming her baby and that she was already eight months along.

“A journey that is exciting and very scary at the same time but worth it, I wanna thank God for lesibusiso esisendleleni … I’m 8 months in today and I can’t believe it’s almost time. We can’t wait to meet you Zenala ka mama,” she wrote in the now deleted post. 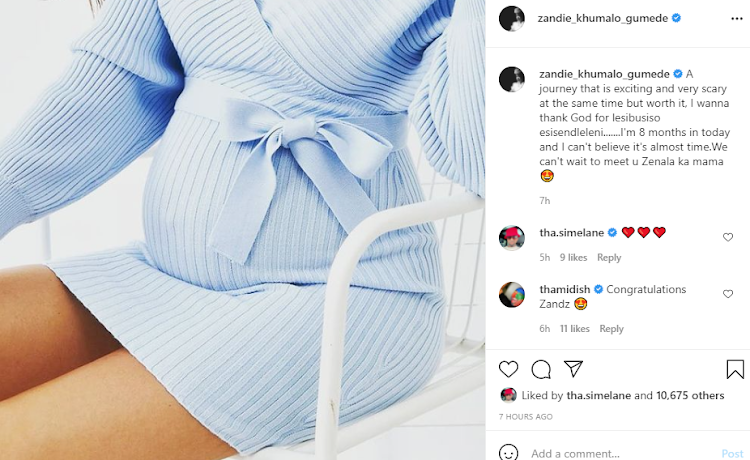 Fans quickly realised that the name “Zenala” seemed to also be the name of an upcoming EP and after she deleted the baby bump picture, they started speculating that the songstress was trying to create buzz around her EP.

Afromambo reached out to Zandie for additional comment and clarity on the matter and the singer responded with confirmation of her pregnancy.

“I don’t do PR stunts. Yes, I have an EP coming out today midnight and it’s called Zenala named after my baby so people kept on asking why I called my project ZENALA and it was only right that I address it,” she said.

The singer said she was treating her pregnancy like the sacred time it is for her young family and she would have kept it to herself if she wasn’t in the show bizniz.

“I’m a musician not a celebrity so I decided to honour my child the best way I know how which is music and through song. This is a very sacred moment for me and my family which is why we kept it to ourselves for so long. Actually if it was up to us we would have kept this to ourselves forever but because of the nature of business I’m in I had no choice.”

Even though the faceless baby bump snap has been deleted, the singer let an earlier post in which she expressed gratitude to her husband for “trusting her with his family’s legacy and lineage”.

“You changed my life, invested in my career when I didn’t even believe in myself ,then u changed my surname from Khumalo to Gumede at the same time changing my title from Miss to Mrs but the recent change u made beats all of them. I love u so much Phakathwayo and thank u for trusting me with your life, nomuzi kababa wakho,” she wrote.