Skip to content
Home Health Linea nigra: What that pregnancy belly line means and why it appears

Linea nigra: What that pregnancy belly line means and why it appears

The linea nigra is a dark, vertical line running down your belly. Also called the pregnancy line, it shows up in most pregnancies, but is more noticeable in women with dark skin or hair. The linea nigra appears because of high levels of hormones like estrogen and progesterone during pregnancy, which can make some areas of the skin look darker. After pregnancy, the line on the stomach will usually fade within a few weeks. 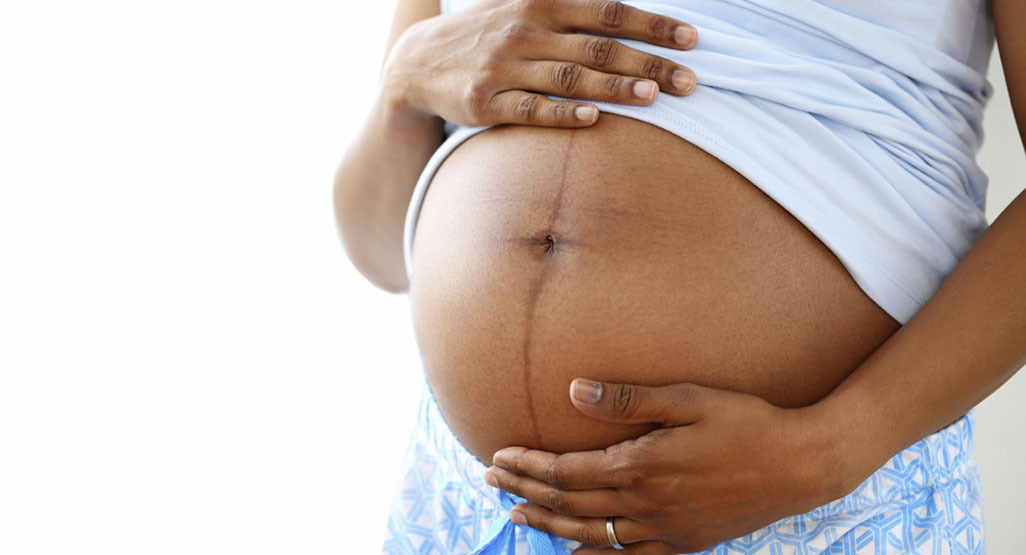 What is the linea nigra?

The linea nigra is a dark, vertical line on your belly that appears during pregnancy. Latin for “black line,” the linea nigra usually extends from your belly button down to your pubic area. In some women it also extends upwards from the belly button. Most pregnant women will develop one, but it’s a little less common or noticeable in women with fair skin. The linea nigra can also appear on newborn babies.

Why does the linea nigra appear?

The linea nigra’s appearance is related to higher-than-usual levels of hormones during pregnancy. Estrogen and melanocyte-stimulating hormone act on the cells that contain melanin, the pigment that gives your skin its color. It’s not well understood why these cells (called melanocytes) appear darker in some parts of the body and not others.

The linea nigra is just one of the ways that skin can change during pregnancy. Some women develop darker patches on their face called melasma or “mask of pregnancy.” Often, other pigmented areas of skin get darker. You may notice this on your areolas (the area around the nipples); your labia majora (the folds of skin around the vagina); and where your skin creases, such as by your armpits and where your legs meet your torso.

When does the linea nigra appear?

As hormone levels rise, a noticeable linea nigra develops, usually by the middle of pregnancy. In fact, this line on your belly was always there but wasn’t visible. That line is called the linea alba (white line). When it darkens, the linea alba becomes the linea nigra.

Can I avoid getting a pregnancy line on my stomach?

No, since it’s connected to hormone levels, the pregnancy line isn’t something you can avoid. But you can take steps to minimize melasma, and these may help minimize the linea nigra as well:

When will the linea nigra go away?

After your pregnancy, the linea nigra should fade over a few weeks to months, though in some women it may not disappear entirely.

If you still have a pregnancy line months later and want to treat it, skin whitening products might be an option (they’re not recommended during pregnancy). As always, check with your health care provider before using any over-the-counter products if you’re pregnant or breastfeeding.

Most likely, the linea nigra will disappear after birth without you having to do anything, or even think about it.

A dark, vertical line on your stomach is called a linea nigra. A linea nigra is very common for pregnant people. It’s less common but does develop in men, nonpregnant women, and even children.

A linea nigra isn’t harmful. It’s likely caused by shifts in hormones. The increase in hormones causes melanin-producing cells in the skin to produce more pigment. Because the linea alba is always present (it’s just too light to be seen), the increased pigment makes the line very obvious.

For most people, the line will disappear on its own. There’s no treatment, but if you’re concerned about underlying issues that may be causing the dark line, talk with a doctor. They can help rule out issues that may be contributing to fluctuating hormone levels.