Twins born with separate fathers are rare in the human population. Although there isn’t much known about heteropaternal superfecundation — as it’s known in the scientific community — a study published in The Guardian, says about one in every 400 sets of fraternal twins has different fathers.

Simon and Graeme Berney-Edwards, a gay married couple, from London, England both wanted to be the biological father of their first child.

“We couldn’t decide on who would be the biological father,” Simon told The Daily Mail. “Graeme said it should be me, but I said that he had just as much right as I did.”

The only way to make it happen would be to have twins through in vitro fertilization. But they would have to find a doctor that would implant embryos from separate fathers in the same surrogate.

They knew it wouldn’t happen in England, so they looked for a doctor and surrogate mother in a different countries.

“I saw Simon and Graeme’s profile on a surrogacy website and I thought they had lovely smiles,” Meg Stone, the Canadian soon-to-be surrogate, said. “I had recently split with my partner and I wasn’t ready for another baby, so I wanted to help someone.” 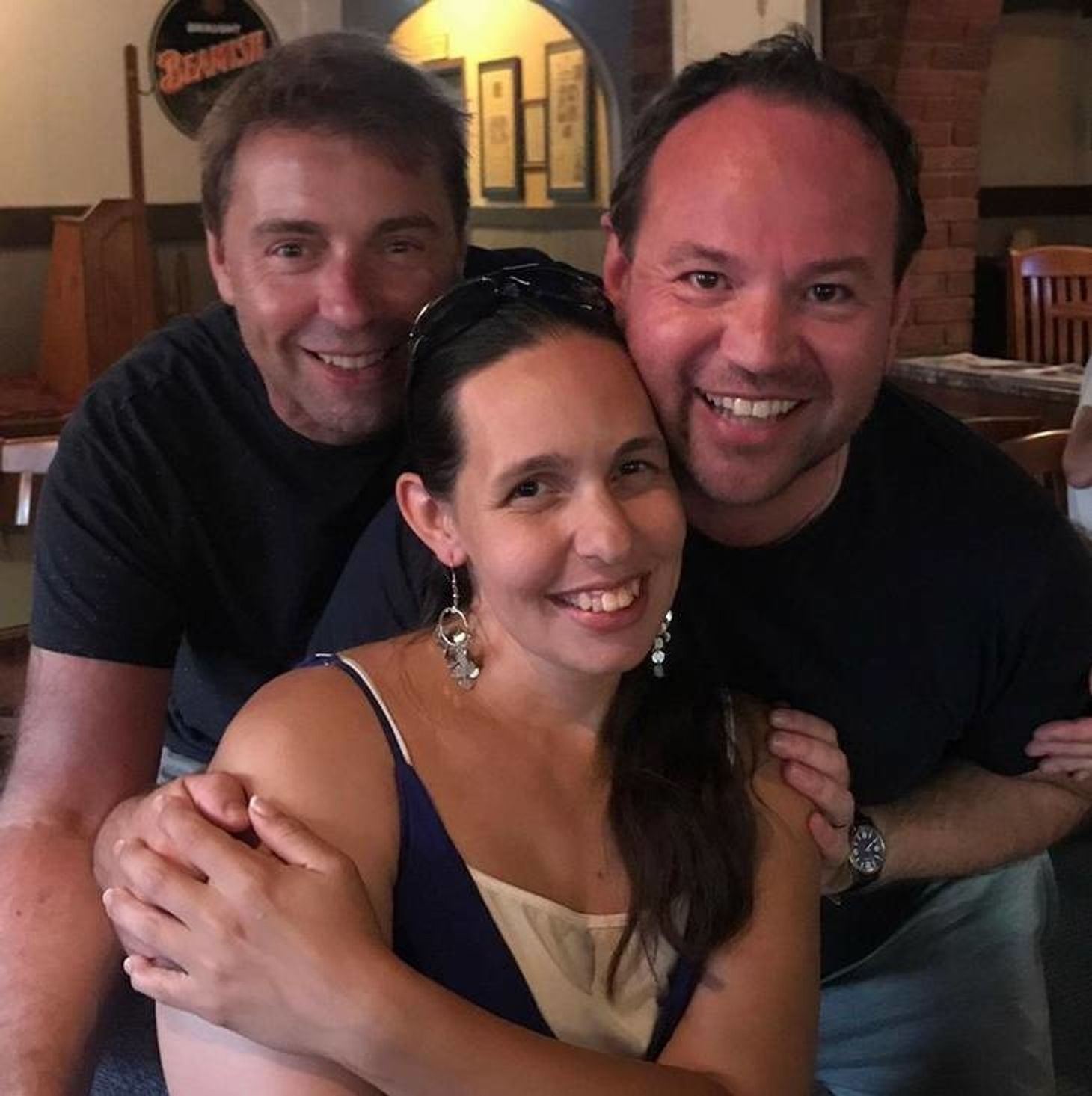 Meg was already a mother of two children, Jeffrey, 12, and Max, five.

The couple flew out to Los Angeles, where they both fertilized eggs from an anonymous donor. Then, they journeyed to Canada where they met with Meg to be sure she was the perfect fit.

“We were nervous at the beginning — in case that we didn’t click with her. But we needn’t have worried,” Simon said.

Six months later, one fertilized embryo of Simon’s, and one embryo of Graeme’s, were inserted into Meg’s womb.

The couple spent a stressful week hoping both embryos would take. They were afraid that one of the fathers’ embryos would work, the other wouldn’t, and they’d have to eventually go through the same process again.

“She FaceTimed us from the scanning room. First of all, we saw one heartbeat, and our stomach clenched with nerves,” Simon said.

“Then we saw the other heartbeat. Graeme and I just hugged each other,” he continued. “We were just over the moon. We were both going to be dads — she was pregnant with both of our babies.”

The couple kept in close touch with Meg over the coming weeks and flew back to Canada for her 19-week scan. The two proud fathers-to-be were delighted to touch her belly and feel their babies kicking inside the womb.

At 31 weeks, Meg was in pain and thought she was about to go into labor. So the two men quickly packed their bags and flew to Canada.

“We dashed to the hospital when we arrived, to find out it was a false alarm,” Simon said. “We were just so relieved that she and the babies were fine.”

Husbands who each biologically fathered one twin share their amazing story ‘There has been so many lovely comments’… https://t.co/iMX7f6wnKE
— LGBT News World (@LGBT News World)1548727351.0
“It was the most amazing experience of our lives,” Simon said. “Alexandra was born first and then Calder arrived minutes later.

“When we both held them for the first time, we couldn’t believe that we were both daddies,” he added. “It was a long way to go and do this, but it was worth it to both be able to have fathered one of the twins each.”

“Calder was the double of Graeme, and Alexandra was the image of me,” Simon said.

The couple remained in Canada for seven more weeks before they could take their newborns home. Then, they hopped on a plane and returned to England.

But sadly, they had to leave a new member of their family behind.

“It was sad to say goodbye to Meg, When we brought them home for the first time, it was just incredible,” Simon said. “Since then they have gone from strength to strength. They are doing so well and hitting all their milestones.”

The twins recently celebrated their first birthday and the fathers flew Meg out to celebrate with them.

“Simon and Graeme are like brothers to me now,” Meg said. “They call me the twins ‘Tummy Mummy’ which I love.” 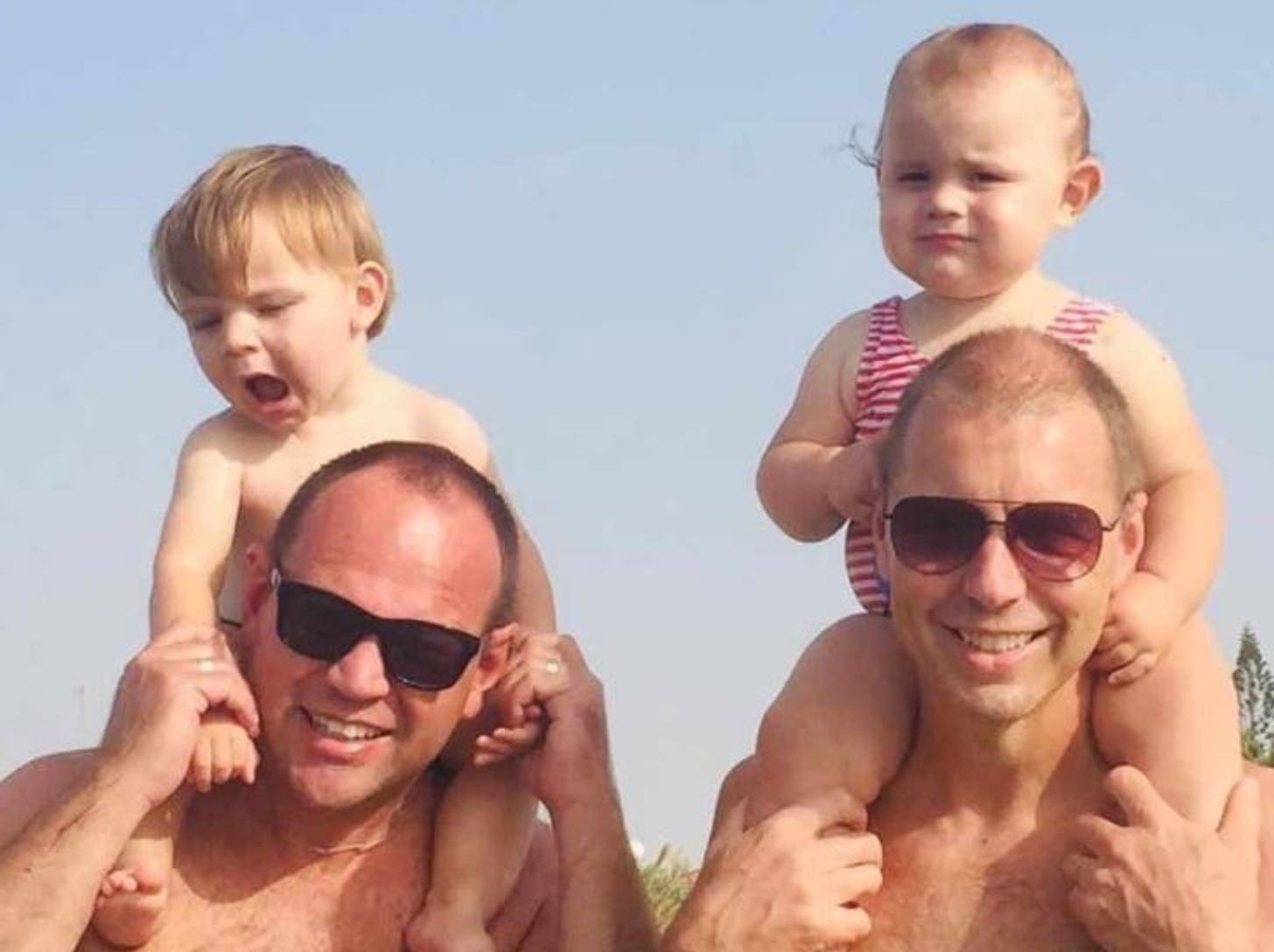