The shocking news comes just one day after Biles opened up about the pressure she feels while competing in the Games. “it wasn’t an easy day or my best but I got through it,” she wrote on Instagram after prelims. “I truly do feel like I have the weight of the world on my shoulders at times.”

Simone Biles Breaks Silence After Withdrawing From Gymnastics Team Final at 2020 Olympics
After Simone Biles exited the women’s gymnastics team final at the Tokyo Olympics, she shared insight into her physical and mental health, noting she may not compete in the individual all-round.

On Tuesday, July 27, the four-time gold medalist withdrew herself from the women’s gymnastics team final at the 2020 Tokyo Olympics following a rare misstep during her vault rotation. After initially leaving the floor with a trainer, Biles returned in warmup gear to cheer on her teammates as they won the silver medal.

Understandably, the GOAT isn’t pleased with how the day panned out. “I’m OK, just super frustrated how the night played out but super proud of these girls that stepped up and did what they needed to do,” Biles told Today‘s Hoda Kotb. “And now we’re Olympic silver medalists so it’s something that we’ll cherish forever.”

Ever the team player, she motivated Jordan Chiles, Grace McCallum and Suni Lee to keep fighting without her, telling them “you guys need to relax, you’ll be fine without me. Go out there, kick some butt just like you’ve done in training and just lay it out on the floor and see what happens.”

And while she said she’s physically good—”I’m in shape”—mentally, she is struggling. “Emotionally, that kind of varies on the time and moment,” she noted. “Coming to the Olympics and being head star isn’t an easy feat, so we’re just trying to take it one day at a time and we’ll see.”

As for competing in the individual all-round competition on July 29, Biles said she plans to take things “day by day” and see how she feels.

Biles later took to social media to celebrate her team’s silver medal. “I’m SO proud of these girls right here. You girls are incredibly brave & talented!” she wrote on Instagram alongside a picture with Chiles, McCallum and Lee. “I’ll forever be inspired by your determination to not give up and to fight through adversity! They stepped up when I couldn’t. thanks for being there for me and having my back! forever love y’all.”

“I know I brush it off and make it seem like pressure doesn’t affect me but damn sometimes it’s hard hahaha!” she added. “The olympics is no joke! BUT I’m happy my family was able to be with me virtually they mean the world to me!” 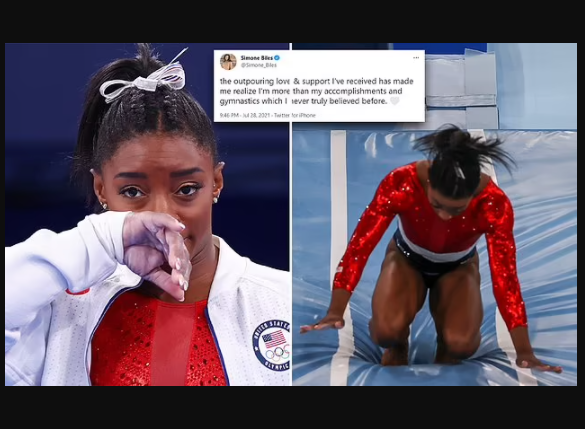 Team USA superstar gymnast, Simone Biles has broken her silence after  her shock withdrawal from the individual all-around final at the Tokyo Olympics.

the outpouring love & support I’ve received has made me realize I’m more than my accomplishments and gymnastics which I never truly believed before. 🤍

Biles, who won four gold medals at the Rio 2016 Games, including the individual all-around title, announced early on Wednesday morning that she has chosen not to defend her title, after consulting with USA Gymnastics officials following her sudden withdrawal from the team competition on Tuesday.

On Wednesday evening, she took to Twitter to thank her fans for their ‘love and support.’

‘The outpouring love & support I’ve received has made me realize I’m more than my accomplishments and gymnastics which I never truly believed before,’ Biles tweeted on Wednesday night.