‘Love’ Is the Most Common Word in Death Row Last Statements.

Before getting executed, every person is allowed to speak their last words, and this has been practiced for centuries now. But do their words really mean anything?

Most people are apologetic during this time, and before we pass away, we ask for the forgiveness and mercy of others. However, there are others who boast about their criminal records before execution. While in other cases, people are mentally ill and whatever they speak is nothing but gibberish. But then again, people say that the true nature of a person is revealed in these times.

Last rites before execution
In Christianity, the last rites, also known as the Commendation of the Dying, are the last prayers and ministrations given to an individual of the faith, when possible, shortly before death. They may be administered to those awaiting execution, mortally injured, or terminally ill.

Even though the persons life will be taken away soon, this chance to speak gives him a bit of power. You have probably noticed that during arguments or fights, everyone wants to be the last person to be able to speak, which they think gives them some sort of authority in the circumstance.

In this article, you will be able to know about the most terrifying and twisted final words of some of the most famous criminals. Trust me you wont able to forget these even if you want to.

Thomas J. Grasso was convicted of strangling 87-year-old Hilda Johnson with her Christmas tree lights. Six months later, he strangled Leslie Holtz, an 81-year-old man, with an electrical cord. He was executed by lethal injection on March 20, 1995. He had requested SpaghettiOs as part of his last meal, but received spaghetti and meatballs instead.

Robert Alton Harris was found guilty of the murder of two teenage boys in San Diego, California in 1978. He was executed in a gas chamber on April 21, 1992.

In addition to writing the novel The Riddle of the Sands, Robert Erskine Childers was a gun smuggler. He was executed on November 24, 1922, during the Irish Civil War, for illegally possessing a semi-automatic pistol nicknamed the “Destroyer.”

Carl Panzram was executed by hanging on September 5, 1930. The reasons are best explained by the man himself:“In my lifetime I have murdered 21 human beings, I have committed thousands of burglaries, robberies, larcenies, arsons and, last but not least, I have committed sodomy on more than 1,000 male human beings. For all these things I am not in the least bit sorry.”

James D. French was sentenced to life in prison for killing a motorist while hitchhiking. Allegedly, French, not wanting to serve the life sentence, was too afraid to commit suicide and subsequently killed his cellmate, compelling the state to sentence him to death. He was executed by electrocution on August 10, 1966.

Barbara Graham, a.k.a. “Bloody Babs,” broke into the home of Mabel Monohan in an attempt to rob her. Graham pistol-whipped Monohan, cracking her skull. She and her accomplice, John True, left with next to nothing, missing about $15,000 worth in jewels that were in the house. Graham was eventually arrested when True testified against her. She was executed in the gas chamber on June 3, 1955.

Andrei Chikatilo, a.k.a. “The Butcher of Rostov,” was a Soviet serial killer who confessed to murdering over 50 women and children between 1978 and 1990. He was executed in February 1994 with a gunshot to the head

Edward “Ned” Kelly was a notorious bushranger (escaped convict who hid out in the wilds of Australia) who was charged with various murders, bank robberies, and a series of other minor charges. He was executed by hanging on November 11, 1880, and remains Australia’s most famous outlaw to this day.

Anarchist and labor union activist George Engel was thought to have been involved in the 1886 bombing of the McCormick Plant in Chicago, and was eventually found guilty of conspiracy. He was hanged on November 11, 1887.

John Spenkelink had served time for petty crimes before being convicted of murdering Joseph Szymankiewicz, another criminal, in Tallahassee, Florida, in 1973. Spenkelink was executed by electrocution on May 25, 1979.His execution, just the second nationwide after the Supreme Court reinstated the death penalty in 1976, brought up a lot of controversy on whether capital punishment discriminates against the poor.

Leonel Torres Herrera was convicted in 1981 of shooting and killing Los Fresno police officers Enrique Carrisalez and David Rucker. Herrera was executed by lethal injection on May 15, 1993.

Gary Burris was given the death sentence for the murder of Indianapolis cab driver Kenneth Chambers in 1980 and executed by lethal injection on November 20, 1997.

Patrick Bryan Knight was executed by lethal injection on June 26, 2007, for the murder of his two neighbors.Before his execution, Knight held a contest with inmates to come up with a joke for him to tell as his last words. He even set up a website and made the competition public. But his last words were not actually the competition’s winning joke; they were instead his own.

Robert Drew was accused of brutally stabbing Jeffrey Mays to death in 1983 and was executed by lethal injection on August 2, 1994. However, with no physical evidence tying him to the crime, some still argue that Drew was an innocent man.

As most people are aware, Saddam Hussein was the fifth President of Iraq, serving from July of 1979 until April 9, 2003. Following his capture during the second Gulf War, he was eventually found guilty of crimes against humanity by the Iraqi Special Tribunal and executed by hanging on December 30, 2006. 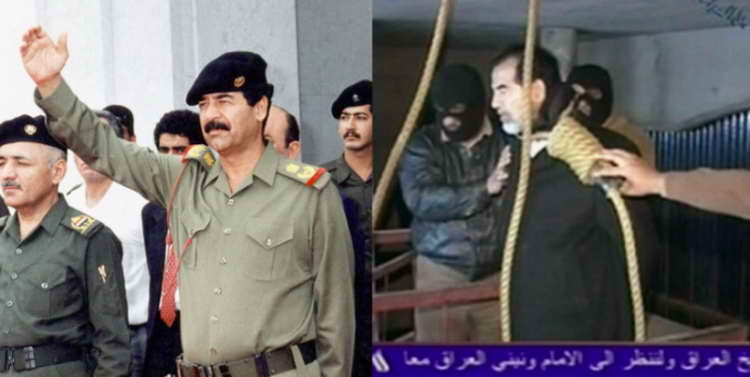 Sarah Good was one of the first women to be accused and executed during the Salem witch trials. She was claimed to have cast evil spells and attacked a woman with a knife. She was executed by hanging in July of 1692.

Steven Judy was found guilty of raping and murdering Terry Lee Chasteen and killing her three children in 1979. He was executed by electrocution on June 15, 1981.

One of the most notorious criminals of the 20th century, Ted Bundy was a serial killer, rapist, and necrophile who was responsible for the murder of at least 36 women. He was executed by electrocution on January 24, 1989.

As leader of the National Fascist Party, Benito Mussolini ruled Italy from 1922 until 1943. His alliance with Adolf Hitler’s Nazi Germany formed the initial backbone of the Axis powers of World War II.In the waning days of the war, he was executed at gunpoint by anti-fascist partisans on April 28, 1945.

Famous for both demanding the death sentence and for becoming the first person to receive it in the United States after it was reinstated in 1976, double murderer Gary Gilmore was executed by firing squad in Utah on January 17, 1977.He requested that his organs be donated, and within a few short hours after his death, two people had his corneas. Ten years after his death, his last words inspired Nike’s famous “Just do it.” advertising campaign.

Harry Harbord “The Breaker” Morant was an Anglo-Australian military officer who was arrested for war crimes during the Second Anglo-Boer War. He was executed by firing squad on February 27, 1902.
share…