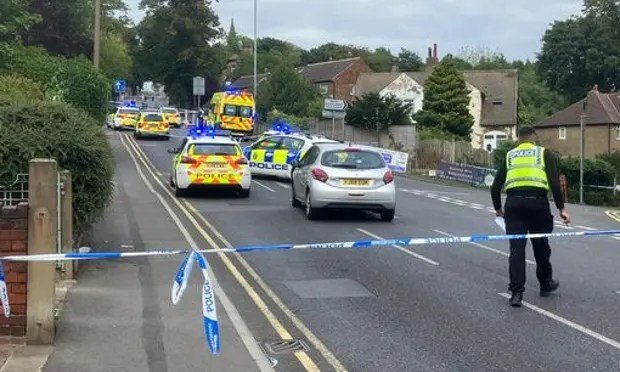 Boy dies after being stabbed outside school in Huddersfield.

After a 15-year-old kid was stabbed outside a school in Huddersfield, police opened a murder inquiry.

At 2.54 p.m. on Wednesday, officers learned from a third party that a teenager had suffered serious injuries during an assault in Woodhouse Hill, Fartown.

In addition to receiving emergency surgery at Leeds General Infirmary, the victim, who was in serious condition, was also treated on the scene. Shortly after, the hospital declared the teenager dead, according to the police.

A police cordon was later set up after the attack, which took place near the entrance of the mixed secondary school North Huddersfield Trust School.

The inquiry into the death of the kid, whose identity has not been released, is being handled by detectives from the West Yorkshire police homicide and major enquiry unit. There have been no detentions.

Although a number of witnesses have been found, senior investigating officer DS Marc Bowes stated they are still interested in hearing from anyone with additional information.

“Our investigation is still at a very early stage, and we will be carrying out extensive inquiries to establish the full circumstances surrounding this incident that has resulted in the absolutely senseless loss of a young life.

“We recognise that an incident of this nature will cause understandable shock and concern in the community, and we are working closely alongside our colleagues at Kirklees district who are increasing their presence in the area to reassure people and keep them updated as our investigation progresses.

“We have already identified a number of witnesses to the incident itself but would still like to hear from anyone who has any information that could assist the investigation.”