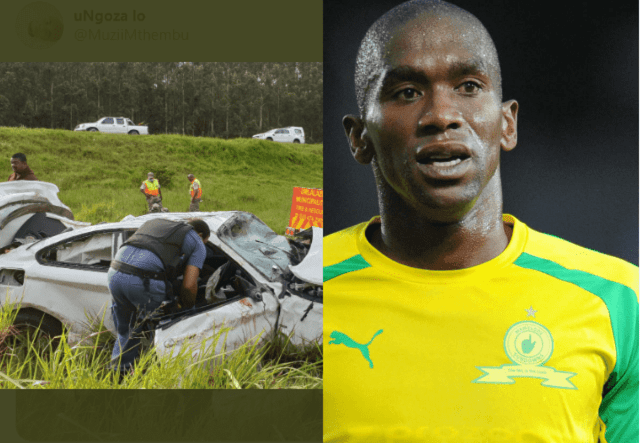 Former Mamelodi Sundowns Defender and Amazulu Defender Anele Ngcongca accident happened around 05h00 this morning on the N2 in KZN.

The footballer died from the injuries sustained in the accident. Coincidentally, Anele died before his ex-lover and kwaito star Mshoza was even buried. Mshoza died on the 19th of November at a Johannesburg hospital after a short illness.

Reports from people who visited the accident revealed that Ngcongca was thrown from the vehicle and died on the scene.

He also had a female companion in the car and she is in a critical condition in hospital.
A police officer not authorised to speak to the media told a local publication that the defender has indeed passed on.

“It happened near Fairbreeze on the N2. A woman had been driving a white BMW. The male passenger was flung from the vehicle and was pronounced dead upon arrival of paramedics. The driver is currently in a critical condition and was transported to the hospital,” he said.

FOR YOU :
See what this girl was spotted doing on the street that got reactions

The South African football family has lost immeasurably as Anele was one of the most decorated South Africa footballers, having won trophies at home and in Europe.

Ngcongca was recently released by Sundowns to play for AmaZulu and he was an Amazulu player at the time of his car accident.

No one will ever replace you, Ginimbi’s wife speaks out