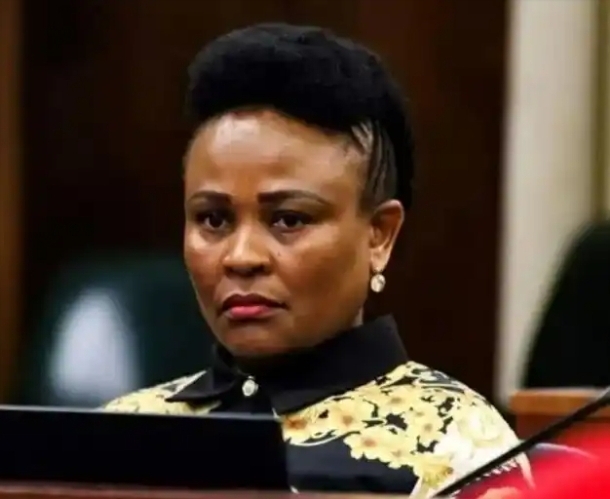 Taxpayers have paid for Mkhwebane’s stay at the opulent estate, which also includes the formal presidential house Mahlamba Ndlopfu residence.

The 1.07 square kilometer property has four gatehouses, 202 CCTV cameras around the perimeter, 15 tennis courts, a 9-hole presidential golf course with a helipad, and 8.1 kilometers of anti-climb motion detection fences.

Mkhwebane reportedly relocated into the estate, close to the nation’s center of executive power, Union Buildings, in 2017 after claiming unsubstantiated threats against her life.

She reportedly moved into a flat, still on the ministerial estate, at the Public Protector’s office’s expense of R11 000 per month in rent.

The institution’s CEO Thandi Sibanyoni and the acting Public Protector Advocate Kholeka Gcaleka notified Mkhwebane in a letter sent last month that the Public Protector’s office had decided to end the lease between it and the Department of Public Works and Infrastructure, which regulates the use of state-owned property, and they did so in writing.

A legal opinion dated October 17 that City Press claims to have seen advises the accounting officer to inform Mkhwebane that the lease arrangement is being terminated as a result of an internal probe.

The report claims that lawyers had to determine if she was required to stay in a state-owned home because she was a protected VIP as defined by the risk information administration system or because it was part of her benefits.

But according to the report, the internal legal opinion discovered that her benefits and conditions did not grant her access to elite state-owned housing.

She was permitted to relocate into Bryntirion by the late Nathi Nhleko, minister of public works and infrastructure, but it was made clear that she would be paying for it herself and that the arrangement would only last for a year.

After a panel determined that there was sufficient information forming prima facie proof of Mkhwebane’s incapacity, she is currently suspended pending the results of parliamentary proceedings reviewing her suitability to hold office.

The Sunday report reveals that her office spent around R4 million on her rental fees, an expense that was deemed irregular. This is in addition to the millions of rands she racked up with her disastrous findings and corrective actions.

Neels Van der Merwe, senior manager for legal services in the Public Protector’s office, informed the parliamentary committee conducting the section 194 inquiry into Mkhwebane’s fitness that the office had spent R147 million over the previous five years on expenses that had an impact on investigations.

The committee also learned how media analysts and strategists Paul Ngobeni, Professor Sipho Seepe, and Kim Heller earned thousands of rands by writing negative articles about judges who had ruled against Mkhwebane in order to improve the Public Protector’s reputation.

She was clarified as saying she had no trouble leaving the residence, but she needed a letter from Acting Public Protector Kholeka Gcaleka to the SAPS stating that she was leaving and that she was no longer considered to be at high danger.