The Democratic Alliance (DA) in the Western Cape has called on the province’s residents to reject the launch of Operation Dudula’s branch in the province.

The controversial anti-immigrant group, which has been targeting undocumented migrants in areas with a high density of foreigners in South Africa, launched its branch on Saturday at the Cape Peninsula University of Technology.

Operation Dudula members handed over a memorandum of demands to police calling on the South African Police Service to address crime in Cape Town’s townships.

While everyone is indeed entitled to the right of peaceful assembly, the DA said the anti-immigrant organisation formed part of “the concerning trend of xenophobia and Afrophobia that is spreading across South Africa”.

“We call on all residents of the Western Cape to stand against the hatred, intolerance and vigilantism that xenophobic organisations and politicians use for cheap politicking and short-term gain,” said Ricardo Mackenzie, DA Western Cape acting spokesperson on community safety, said in a statement.

He said immigrants who came to the Western Cape, were there to seek a better life for themselves and therefore the movement should blame government for SA’s challenges, not foreginers.

“Our country is faced with immense turmoil: unemployment is on the rise, corruption is rife, law enforcement is mismanaged and basic service delivery is in tatters due to the inability of the national government to fulfil its mandates…

“Foreign nationals are not the problem, the ANC is. To use immigrants as scapegoats set a dangerous precedent and will lead us down a reckless path as seen in many other countries throughout history. Call for untiy Mackenzie said South Africans should unite as a nation and hold government to account for its failures.

“Our constitution is the bedrock of our country and provides us with the foundations to realise an open opportunity society for all.

“Within it, the Bill of Rights grants every individual equal and inalienable rights before the law no matter their race, religion, culture, wealth or origin.

“It is this document that is the culmination of all the sacrifices and hardships that many had to endure in order for us to live in a democracy today,” MacKenzie concluded. 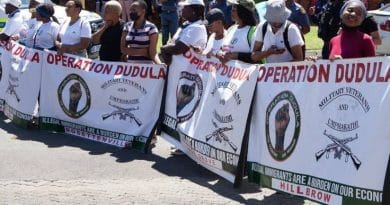