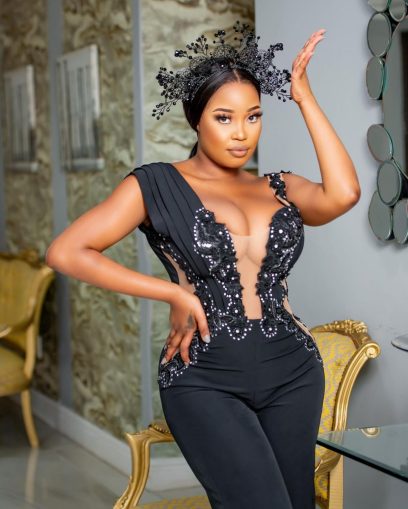 Eva Modika shows off her new R65K body. After successfully having cosmetic procedures at a cosmetic surgery facility in Turkey, South African businesswoman and media personality Eva Modika has “achieved” the figure of her dreams.

The Diamonds and Dolls actress underwent her first liposuction procedure in 2020 in South Africa, but the operation was unsuccessful, leaving Eva with a botched procedure that caused fibrosis and a lump.

The businesswoman decided to give cosmetic surgery another shot and traveled to Istanbul earlier this year where she received Brazilian Butt Lift (BBL) and liposuction at a staggering cost of R65,000, according to TshisaLIVE.

she poses nak&d with leaves covering her b00bies and lower areas in a series of shots made during a minimalist photoshoot that highlight her imposing hourglass physique.

“Ain’t no miles here new body,” said Modika in the caption of her post.

In an interview with TshisaLIVE while she was still recovering at the hospital for cosmetic surgery, Modika stated that she was eager to get well and that the discomfort of the process was entirely justified given the ripped physique she now possessed.

“I had been planning to do the procedure for some time. I can’t wait for a full recovery, the pain is worth it. It means me taking more videos with less filters because I will have the confidence I need,” said Modika.

The 27-year-old social media personality also gushed about how pleasant her stay in the hospital at The Clinique was, describing how the medical staff’s regular check-ins and assistance with breathing exercises and other methods to hasten her recovery had been incredibly helpful.

“The experience at the hospital in Turkey has been amazing, the aftercare is superior. They literally check up on you every hour. I can walk around the hospital; the nurses help with breathing exercises and other techniques to help me recover fast. I love it here,” said the entrepreneur.

Eva further disclosed that she had to recover on her own at home with the aid of her sisters following a prior unsuccessful surgery because she had not received any additional care.

“Before I was alone at home and was assisted by my sisters who cooked and took care of me,” said Modika.