Not too long ago it was reported that social media influencer and socialite Inno Morolong had allegedly assaulted one of her friends during their night out together.
According to the reports, Inno’s friend, whose name is yet to be revealed, disobeyed Inno’s request to accompany her to her hotel room and that resulted in one brutal beating that left some really gruesome injuries on the said friend.
Now taking to Twitter, let’s just say that Black Twitter will ensure that Inno gets what is coming to her. Many still cannot believe that she would brutally assault someone simply because they refused to say yes to a request.
Be advised, the images that follow may be disturbing to look at. 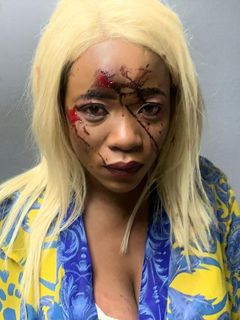 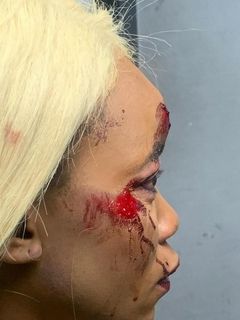 As documented by entertainment blogger Musa Khawula, tweeps have since taken to his comment section to thoroughly drag Inno for her actions with many demanding that justice be served to the assault victim
Tweeps also believe that there is more to the story than what is put out on social media, with many saying that even if Inno was indeed angry that her friend refused to accompany her to the hotel, that should not have been a reason for her to be beaten to a pulp.
If that is not enough, tweeps are also saying that they are not surprised that this happened to the poor girl because Inno has a history of being a ticking time bomb and one can never really be safe around someone who would literally blow up at the tiniest of provocations.
Here are more reactions that have sparked from the story.
“haibo Inno is crazy and dangerous! forcing her friend to go to the hotel, for what!? what was she planning? that girl must sue her no ways!😡 https://t.co/0ROFrvkFHu”
“She probably has that bhululu snake 🐍 from that drama yako etv I forgt the name 🥴🥴🥴”
“I don’t know who Inno Morolong is and she is not even in our SA Celebrities whatsapp group were Som-G is the admin, Inno must be arrested not only for assault but for being toxic also.”
https://twitter.com/khawula_musa/status/1481916135486500865?t=uLW-xtANAbOrlx9D2PZRLw&s=19
Facebook Comments Box
FOR YOU :
Brenda Fassie’s sister is dead. Here is what killed her

10 Things You Should Never Wear on a Plane