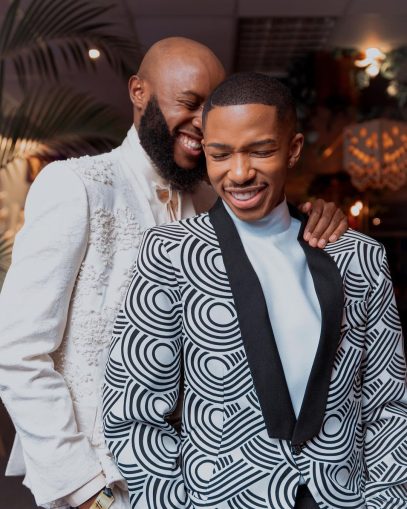 Celebrities from South Africa attended the yearly event looking stunning, and the two aforementioned men posed for some photos together. They looked really cosy.

However, many eyebrows were raised by their poses in the pictures with the post’s message.

“Always and forever, my love,” reads the caption.

Social media users questioned whether they were actually dating, but there is no doubt about their friendship because Somizi Mhlongo, Mohale’s ex-husband, is a common enemy of the two.

Here’s what tweeps had to say:

“Allegedly, Lasizwe and Mohale are dating. The two lovebirds found each other at the Durban July. Wedding date is to be announced next week Wednesday.

“After finishing somizi … mohale is trying his luck somewhere else again”

This is not the first time Lasizwe and Mohale have been linked together. Back in 2019 people thought Mohale was cheating on his ex husband Somizi with him. They like to use pet names when commenting on each other’s posts on social media this fueling romance rumors. Well maybe just maybe this time it’s real.

Lasizwe Dambuza recently debuted on the 8th annual Forbes Africa30 under 30 list, joining other well-known people in the class of 2022.

The comic, who now ranks alongside Phupho Gumede and Musa Keys, expressed his thanks and thought back on his modest beginnings. In Pimville, Soweto, Lasizwe liked to record videos on his phone while walking the streets.

Lasizwe dedicated his award to his parents and wished they were still alive to share in his joy. “Thank you @forbesafrica, thank you to the Sweeeries, my supporters! And thank you to every single one of you who has shown me consistent love,” he wrote.