Meshack Mavuso Wants out of The Shaka Zulu Family Drama.

The late Zulu King Shaka Zulu’s family is fighting valiantly to keep their legacy in check and to have their stories told in their own unique ways. Or at least that is what we infer from the fact that Shaka Zulu is the subject of a drama with two productions.

It’s Meshack Mavuso’s play Shaka Zulu: The Gaping Wound, which retells the tale of Ilembe Eleqa Amanye Amalembe Ngokukhalipha, if it isn’t the Shaka Ilembe drama between the cast and their respective families.

In an interview with Drum Magazine, he disclosed that he had cut ties with the families’ commotion and had received the approval of the reigning Zulu King, Misizulu kaZwelithini.

“I do not want to entertain this thing and be in trouble for something I do not know. The entire world knows him as Shaka Zulu. I sat down with the current King (King Misuzulu) and we spoke about this and I believed that was enough. Okunye nokunye, cha mina angikwazi (I don’t know about anything else).”

“The story of Ilembe is internationally known and he is known as Shaka Zulu and so I cannot be expected to fix something that has nothing to do with me. I did not know of issues of inhlawulo (damages) that are between the families. If they want to sue anyone, they must sue those who wrote the history books and leave me alone. I must be excused from family issues.”

This brings up the conflict between the Shaka Ilembe crew and the Mhlongo family. After allegedly visiting Queen Nandi’s grave without their consent, the crew allegedly got into a fight with the family.

However, this was rectified by one of the family members who said he had written to the crew and given them permission. “I am Reacting to the news that Nomzamo Mbatha and Shaka Ilembe crew invited themselves to Queen Nandi’s grave. That is not true. I’m the one who invited the Shaka Ilembe crew. They did not invite themselves as alleged. I wanted them to be there with us,” he said as quoted by the publication.

A previous report states that they were not granted any permission. “I was told by induna Ngelemu Mdlalose that a large group of people, including Nomzamo had invaded Queen Nandi’s grave. Mdlalose wanted to know if I knew or had authorised their visit. But I was also shocked and disturbed because I had no knowledge of the visit,” he told Daily Sun at the time. .

“Any guest or visitor in the area must report to the local induna and myself as a chief. But this was not the case. They simply went straight to the gravesite. We still don’t know why,” he added.

They had informed the chief about this incident. 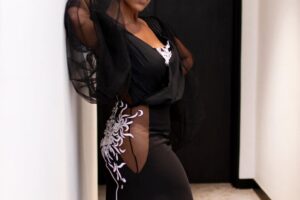