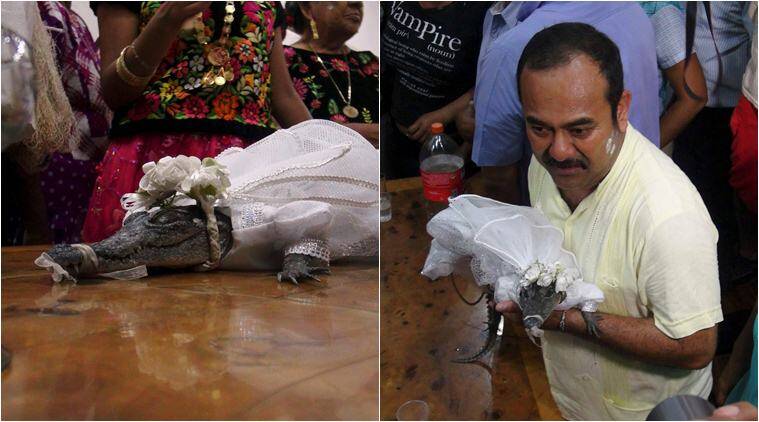 Being in-charge of a town is not an easy job, and mayors around the world often have to give in to the demands of his people in the community. Likewise, Victor Aguilar Mayor of San Pedro Huamelula in Mexico married a CROCODILE! Why? Because it’s tradition.

(And you thought only Indians got married to animals?!)

Yes, no matter how bizarre it sounds, there was a big formal wedding at the Town Hall recently and the entire town was invited. They ceremony was presided over by a priest and the man even kissed his bride at the end of the ceremony! The bride, whom the local community called “the Princess” was all decked up for her wedding and even wore a custom-made white wedding gown, a veil and a floral crown on her head.

The wedding ceremony wasn’t the only thing that happened. The female crocodile was baptised a day before the wedding as well. Subsequently, she was dressed the following day and there was paraded through town with full fanfare, with people singing and dancing and playing traditional songs. Only, the poor animal’s jaws were clamped shut on the big day.

FOR YOU :
See What South Africans Saw in the Middle of the Road that Got them Scared

It is believed that the marriage will bring good luck and prosperity to local fishermen along the Pacific coast of the Isthmus of Tehuantepec in Oaxaca state. Most of the people in this community depend on the sea and it is also said the ritual will ensure a good harvest.

The Mayor told the Daily Mail, “With this ritual we ask for a good harvest, for the sea and the lagoons to give us all the food we need and we ask that everything goes well with everyone here”.

“The marenos (referring to the local residents), call her ‘The Princess’. So the role that I play is to be the husband of the princess,” he told the Sun.

Brenda Fassie’s sister is dead. Here is what killed her