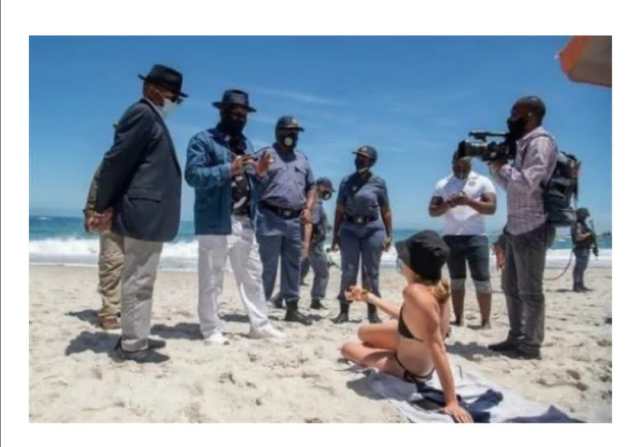 Mzansi fumes over the special treatment Bheki Cele give to white citizens. We consider South Africa a free country, free from white oppression as well as racial discrimination. One would think that black people are treated with respect in their own compared to the way they are treated in countries outside Africa.

However on numerous occasions now we have seen that racial discrimination especially towards blacks is still happening. The latest proof about this has been shown by police minister Bheki Cele.

Man’s Not Barry Roux took to twitter and shared how two faced Bheki Cele can be. He shared a picture of Bheki Cele and his SAPS members standing around an isolated white woman at the beach. He went on to caption it with “Black child you are on your own”. Many people were quick to understand why Man’s Not Barry captioned his pic like this. This because everyone knows how the police minister is harsh about alcohol and violation of the covid-19 regulations set by the South African goverment. However it seems like he only losses his cool if black people are involved . Instead of fining the woman or asking her to leave like he does to his fellow black men he actually began chatting with the women at the beach and those with him began taking the ladies pictures.

Cry my beloved South Africa how can racism come to an end while those are supposed to put an end to it are the one’s Pioneering it. Police Minister Bheki Celi covid-19 regulations apply to everyone not just blacks only.

9 foods that Damage your Eyesight

Celebrities Whose Real Names Only A Few People Know