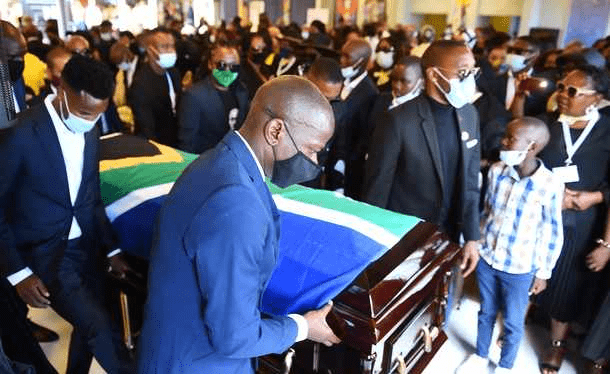 The Gugulethu-born player was killed in a car crash on the N2 outside Mtunzini on the KwaZulu-Natal North Coast last month. Ngcongca, 33, was reportedly on his way to join AmaZulu in Durban after agreeing terms with the club for a one-year loan move. At his funeral on Thursday, Ngcongca was honoured for playing a total of 37 942 minutes on the field in his professional soccer career.

“Every time people of Gugulethu speak of Ngcongca, they speak of a person who has made the province proud, and its townships,” Sundowns coach Manqoba Mngqithi said.

With all of his success, he kept his feet on the ground, was humble, respectful and dedicated, said Mngqithi. Amazulu Football Club manager Ayanda Dlamini said Ngcongca’s presence in the team made a huge impact. “He always wanted people to be happy around him, he had great love for the young ones. He always inspired them to be great in whatever they do. He was a kind, selfless person who never raised his voice … He was indeed a leader, he would even coach his opponent, and that’s how smart he was,” said Dlamini.

Among the community organisations Ngcongca partnered with was the Ithemba Lempumelelo Ceramic Centre, with founder Bafana Msizi saying they would continue Ngcongca’s legacy. “Ngcongca was the brain behind this project. When I approached him to partner with us on this project, I was expecting him to have that celebrity attitude but instead he was a humble person, he welcomed us warmly and took the project upon himself.

Ngcongca was buried at Maitland Cemetery.

AKA joins the viral #Duduzanechallenge as he tries to outshine Nyovest