Moscow’s coronavirus lockdown was strict and long. Its end has been swift and almost total.

Veterans in their nineties joined President Vladimir Putin on Wednesday for a giant 75th anniversary Victory Day parade as if facemasks and social distancing were never invented.

And across the city, with the sun finally beating down, crowds have been flooding back to parks, bars and restaurant terraces, shrugging off the weeks hiding indoors from infection as an unpleasant memory.

Officially Covid-19 has been declared “in retreat”. But with more than 600,000 cases detected country-wide, some fear such statements are aimed at clearing the way for Vladimir Putin’s political priorities: a parade, and a vote on extending his rule.

“The whole country had been preparing all year for the Victory Day parade,” retired naval officer Alexander Goncharov says, after helping get World War Two veterans to the event postponed from 9 May by the pandemic.

He said 28 of them, who’d occupied the seats closest to President Putin, had spent more than two weeks at a sanatorium outside Moscow in pre-parade quarantine, with regular health checks and Covid tests.

On the day itself, all were covered in medals. Very few wore face coverings.

“They were sure they’d be OK. They shook hands with the president with no gloves or anything,” Mr Goncharov told the BBC.

“If the leader of the country is not afraid, then I’m sure the veterans are confident too.”

Back in April, when Mr Putin declared it too risky to press ahead with the 9 May events, Russia was detecting around 3,500 Covid cases each day. Currently the figure is twice that, although in Moscow the infection rate has been falling.

Shops, hairdressers – even the zoo – have re-opened in recent weeks. The latest restrictions were lifted on Tuesday, including on indoor cafes, playgrounds and gyms. 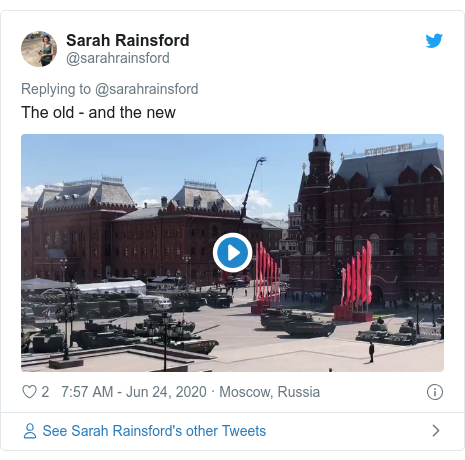 A day later, thousands of troops marched across the cobblestones of Red Square to mark the Soviet defeat of Nazi Germany, a moment of history Vladimir Putin describes as ‘sacred.’

For this big anniversary, President Putin had wanted world leaders alongside him on the tribune, underlining his assertion of modern Russia as a global power as its military arsenal was paraded before them.

The pandemic put paid to that.

The handful of heads of state who did make it to Moscow were mostly from former Soviet republics. Their ranks were depleted even further when two of the Kyrgyz delegation tested positive for Covid-19, forcing the president to skip the parade.

The public, though, defied instructions to watch from home on television: mass gatherings are still banned here.

Many stood on bridges and pavements to watch tanks roll through the city centre. Ignoring the mandatory facemask rule, they squeezed together behind police barriers to snap photos.

No-one stepped in to break up the crowds. This event was always intended as a patriotic boost; a feel-good day after a tough couple of months and a reminder of what Vladimir Putin represents.

It was scheduled one day before the start of voting on a constitutional reform package that could see him running twice more for president.

Virus warnings ahead of vote

In a recent interview, an infectious diseases specialist in Orel, south-west of Moscow, had a stark warning about that ballot.

“Let whoever wants to vote, vote. But there’s no more hospital beds,” Viktoria Adoneva told a local paper. “There will definitely be a [surge in cases]; but we’ll have nowhere to put them.”

When her words caused a national scandal she claimed they’d been distorted, but others agree.

“I think this vote will only help spread the virus,” warns Dr Anton, an ER doctor in Moscow who doesn’t want me to use his surname.

His own hospital is back operating as normal again after treating only Covid-19 cases at the height of the pandemic – a time he recalls as “terrifying”.

“The image they’re creating: the fall in patient numbers, the end of restrictions, the parade – it’s all wonderful, like there’s no problem. But there are problems,” Anton says.

A week of voting

Vladimir Putin himself argues that the constitutional reform allowing him to run again is a vote for stability, eliminating unsettling speculation over who would succeed him come 2024.

Media caption With President Putin’s approval rating at an all-time low, what do people in his home city make of him?

Others see it as grabbing a “window of political opportunity” to ensure he stays in power, snatched between an apparent “victory” over the virus and before the economic effects of the pandemic are fully felt.

In Moscow, those who want to take part can vote online.

That’s risky, according to election monitors, in terms of vote-rigging, but safer physically in a pandemic. For those who do turn out in person, voting has been spread over a week.

“The problem is everyone’s stopped thinking about coronavirus; they think it’s all over,” Dr Anton worries.

After all, their president – who spent a couple of months tucked away in his residence, holding video conference calls – is now walking around without a facemask and shaking hands.

“People are edging closer and closer together on public transport and all over the place,” the doctor warns. “The risk of a new outbreak is very high.”

Passionate Blogger and writer ! We deliver information that matters to you. Incase you missed any trending news or stories,we are here for you! Send us any Information or Stories via WhatsApp https://wa.me/%2B254729000014
Previous Coronavirus: Vaccine volunteers begin to get immunised – Video
Next Almost 1 in 3 pilots in Pakistan have fake licenses.

New York City, with a population of about 8.4 million, has had over 28,000 coronavirus deaths as of …

This site uses Akismet to reduce spam. Learn how your comment data is processed.