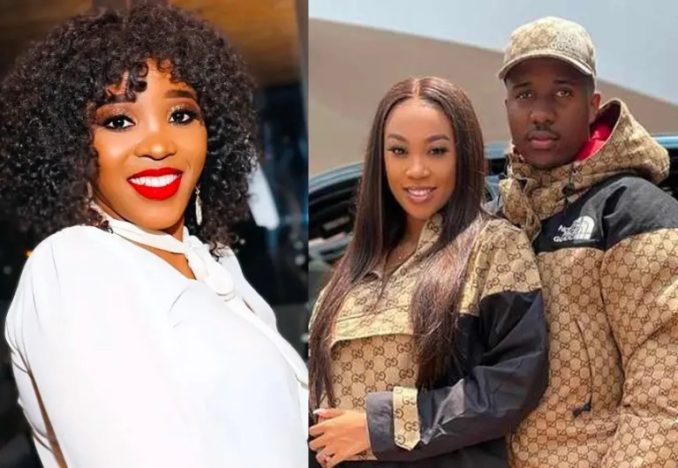 Sbahle Mpisane gossips about Tamia to Sithelo Shozi. An audio of Sbahle spilling disturbing information regarding Tamia and Andile Mpisane’s marriage has surfaced as the conflict between Sithelo Shozi and the fitness guru continues.

In December 2020, The Mpisane’s left everyone dumbfounded after giving Mzansi a glimpse into Andile and Tamia’s wedding. No one saw the wedding coming and some people thought it was a publicity stunt or a music video shoot, but little did we know it was a real wedding.

It appears that Sbahle did not know Tamia before the wedding in addition to Mzansi being unaware of the nuptials. Sbahle states that Andile wed a man she did not know in audio supplied to Sithelo that is making the rounds online.

“I am not against anyone and I don’t want to get involved in Andile’s matters that he has gotten married to someone I didn’t know about. I didn’t know about her, everything was a surprise, and I had no comfort to call you because I know that they listen to phone calls but aside from everything. I just don’t know where me and you stand.” she allegedly told Sithelo.

MaMKhize was charged of convincing his son to wed Tamia in an effort to get rid of Sithelo, but the businesswoman denied the allegations and insisted that she had never made that decision for him. She claimed it was her responsibility as a mother to influence and support her son’s choices.

“As a mother it is my job to guide and support my sons decisions. And I would like it to known that I will never choose for him. I’ve lived my life and learnt my lessons! I will never take away the opportunity for him to live his own life and learn his lessons along the way,” she said in a statement.

A voice recording from Sbahle Mpisane to Sithelo Shozi leaks.

The Mpisane family and Sithelo have been at odds since Andile was accused of being abused. Andile has remained silent in response to Sithelo’s horrifying GBV allegations, but his mother Shauwn Mkhize issued a statement casting doubt on them.

This comes after Sithelo claimed that Andile beat her to a pulp in front of his family, but MaMkhize maintained that Sithelo’s claims are false and that they have never seen such things.

Tweeters were accused of encouraging her son’s allegedly problematic behavior, which caused a stir on social media. Sbahle has questioned why Sithelo never filed a report of abuse against Andile if indeed she was’really’ assaulted by him, and it appears that their dispute has no end in sight.

On Musa Khawula’s Twitter page, Sbahle denied Sithelo’s accusations. She was criticized by a tweep for denying her brother had abused her, but she defended herself.

“How will I say she wasn’t abused when I was aware of such??? With lack of knowledge, I said that picture she posted failed to make me understand how it laid to a miscarriage but y’all explained,” said Sbahle.