Fitness bunny, Sbahle Mpisane has opened up about almost losing her life three times, twice through suicide. Many of our favorite celebrities have died by suicide, and some have spoken openly about trying to take their own life.

Sbahle Mpisane covered all the bases in her extensive Twitter thread when she discussed her suicide attempt for, we can presume, the first time. Sbahle shared a throwback photo of her totaled vehicle from the night of the collision in 2018, revealing that she had made two suicide attempts.

The first time was when she was in hospital when she hung herself but the hospital nurse stopped her.

“In 2018 whilst in hospital I hung myself but my nurse walked in as I just did so. My neck was bruised & I got secured 24hrs in my room,” she shared.

The second time, Sbahle said she tried killing herself in 2019 but woke up four days later, “In 2019 I well planned my suicide attempt but woke up 4 days later. I apologised & promised God not to test him again after saving my life 3 times.” In keeping with her thread, Sbahle discusses what led to her contemplating suicide and how the terrible vehicle accident played a significant part in that.

She had a similar thought in 2021, and this time she had considered burning herself, but she was prevented from doing so by making a call to her therapist.

What helped her cope with the heavy emotions in 2022 was communicating more and being with her family, “2022 has been filled with stress, anger, worries & more tears but I’ve been freeing myself by communicating my worries with my besties. I also find more relaxation by seeing my family more & skin renewal has been a cherry on top.”

Sbahle believes her future is dim because of the injury that left her without an ankle bone. She is appreciative that she is not considering suicide this time, though.

“The thought of having no ankle bone or a promising future has never sat well with me & it still doesn’t. I don’t plan to commit suicide this time, my therapist has been helpful & my psychologist has placed me under medication

“I know I have always had a lot to be grateful for but when emotions kick in, we all become weak. I am still weak, I still don’t understand my survival but maybe there is a purpose for it all. Gotta take it easy…” she added.

Sbahle then opened up about how depression is not something one can control and is happy she survived, “Depression is not controllable but treatable. I survived from it & it still creeps in but I continue to live happily.” 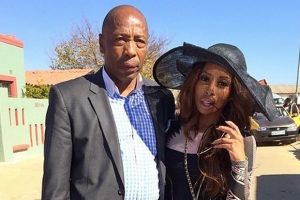