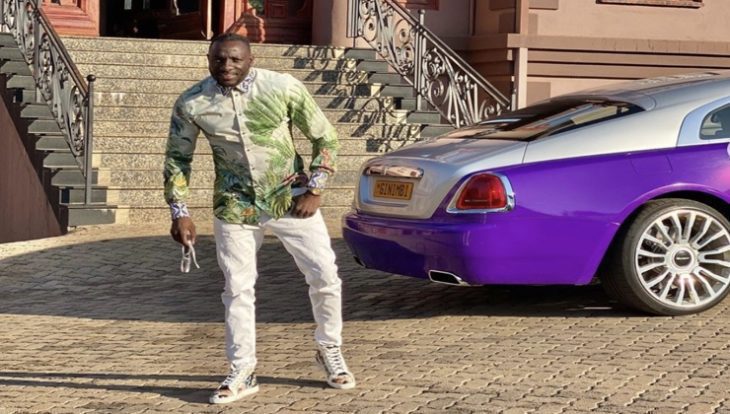 Flashy Zimbabwean businessman Genius Kadungure, popularly known by the sobriquet Ginimbi, had fully planned how his burial will be conducted several months before he died on Sunday, November 8, 2020, his sister says.

Ginimbi, 36, died after the vehicle he was driving, a Rolls Royce Wraith, collided head-on with a Honda Fit in the wee hours of Sunday morning.

Following the crash, Ginimbi’s car hurtled off the road and hit a tree, sparking a huge fire that engulfed the entire vehicle, instantly calcining the three trapped occupants to death.

Ginimbi had been rescued from the driver’s seat by well-wishers, but succumbed to his injuries a few meters from the fire scene.

The other three, who died in the accident, include fitness enthusiast Mimi Moana, her female friend Elisha and Ginimbi’s friend Limumba Karim.

The four had Saturday night celebrated Moana’s birthday at Dreams Nightclub in the capital Harare, and were on their way to Ginimbi’s home when the accident happened.

The crash occurred at Borrowdale, a residential suburb in the north of Harare. The neighbourhood forms the most affluent and prestigious residential area in the whole of Zimbabwe, online search shows.

Following news of Ginimbi’s death, his eldest sister, Juliet Kadungure, has now come out to reveal that her flamboyant brother had fully planned his burial months in advance.

“Genius was a fun-loving character,” Juliet told The Herald, which is the largest daily newspaper in Zimbabwe.

“He always reminded us about how he wanted his funeral to be conducted. In fact, he had a plan and always said ‘ndiri big’, so make sure on my funeral, you do not hurriedly bury me,” said Juliet.

According to Ginimbi’s wish, all the people who will attend his burial penciled in for Saturday, November 14, 2020 must be dressed in white attire. The dress code is synonymous with Ginimbi’s trademark dressing for the lavish parties he used to host.

Juliet said her brother used to tell them that he wanted a big burial ceremony.

“Take time, planning for it. Check my requirements well and one of the things is that I want everyone who will be at my funeral to be dressed in all white, no matter who. Please, make sure you emphasise that, remember, I am an all-white guy. The all-white should be on the day of burial.”

Juliet said according to the plan left by Ginimbi, they will have to wait for his foreign-based friends to arrive for the ceremony, failure to which, the event should be postponed.

“He would say: ‘make sure you get in touch with my other friends abroad and wait for them to come,” said Juliet.

“That is why we are saying for now the funeral will begin on Thursday, [November 12] and for now people are gathered at our father’s residence which is 400 metres away from Ginimbi’s mansion.

“We have set up a tent because there are lots of people coming from all walks of life and we could not accommodate them at the mansion.”

Juliet said there will be two tents pitched for the wake.

“There will be a tent for friends and fans, then a VIP tent,” she said.

“Ginimbi will be buried on Saturday, [November 14] in his yard as he wished to. It is very difficult for us as a family and we kindly request the public to respect us and avoid spreading malicious rumours.

“For now, we have put a family spokesperson who is Clement Kadungure. Anything you hear which is not from him, is not true.”

Juliet said the family was not stopping people from mourning Ginimbi at his mansion, as being reported on social media, but the reason why the funeral was on the other side was to accommodate everyone.

“You may think the yard is big, but it is not big to accommodate everyone as you know many people are coming,” she said, adding: “Like I said, we decided to pitch tents at the open space near my father’s house. It is also for the security of the house.”

Juliet said Ginimbi always wished for his house to be turned into a museum or a hotel upon his demise.

“We are going to invite some local artistes so they will perform on Friday, [November 13], when his body lies in state at his mansion,” she said.

“Remember, Genius owned G-Entertainment where he promoted some local artistes, so we will do his wishes and they will also be dressed in white.”

“We have already caught two people who had stolen plastic chairs,” he said. “Again, the house has a lot of property that needs to be protected. I respect the decision by the family to have the funeral outside the mansion.”