This is why Cyan Boujee might be headed to jail

Dj and brand influencer Cyan Boujee recently came forward to share her story of allegedly being physically assaulted by the owner of Corner Butchery, a venue in Mamelodi. Now as the butchery gives their version of events and Cyan further retaliates, Mzansi is caught in the middle of a battle that many couldn’t care less about.

The DJ first shared a video of her face looking battered, captioned “imagine going to a gig and coming home looking like this as an artist!!! FOR LITERALLY NOTHING.” Naturally, tweeps were shook and went in her comments to offer her their support, saying violence is never the answer.

However, a few hours later, the owners of the venue released a written statement on social media saying that the influencer had not told the story as it happened. According to the owners, Cyan had started the fight when she went after another artist who had been booked to perform.

“Corner Butcher has released a statement with regards to allegations by Cyan Boujee.

Corner Butcher says Cyan Boujee and her friends attacked one of the artists who were booked to perform.

FOR YOU :
AKA New Look Has Mzansi Trolling Him

An altercation ensued between Cyan Boujee and the owner of Corner Butcher.” 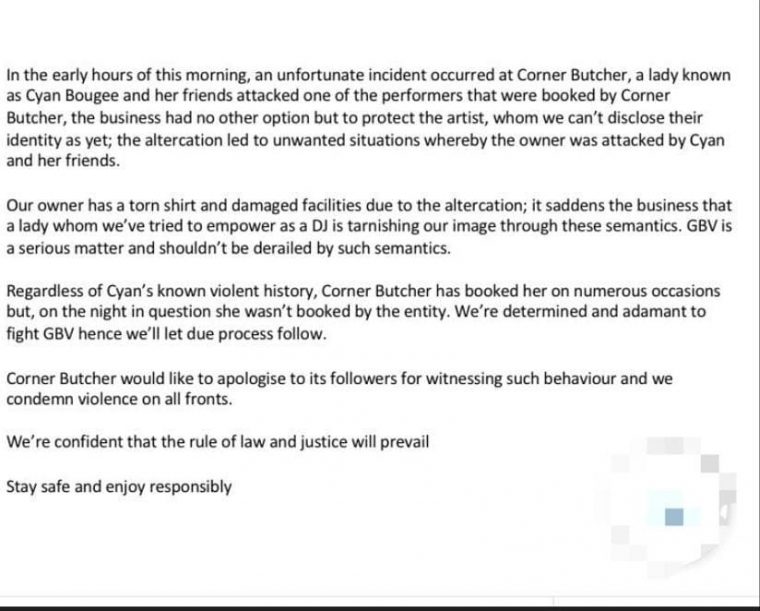 But Cyan soon released yet another video to clarify things. She said there was no artist on that night other than her. She says she and her friends went there because the owner owed her back pay for two previous events, which is why they got into an altercation in the first place.

However, Mzansi is tired of the back and forth between Cyan and the owner. They have begun to poke holes in the stories, particularly Cyan’s. Some think it makes no sense that she went back and played the venue after they failed to pay her the first time, while others say her story is inconsistent as she first said the altercation was for nothing, and that she was there for a gig.

While it’s unfortunate that it had to be a Gender Based Violence incident that started the drama, it is also understandable why many are hesitant to believe her version of events. After all, Cyan does have a history of assault, and Mzansi social media users have quite the long memory.

At the moment, though, the influencer has promised to press charges against the Corner Butchery owner, who said he believes the law will take its course as appropriate. Therefore, it remains to be seen who was telling the truth, or at least, whom the courts side with when the charges are pressed.