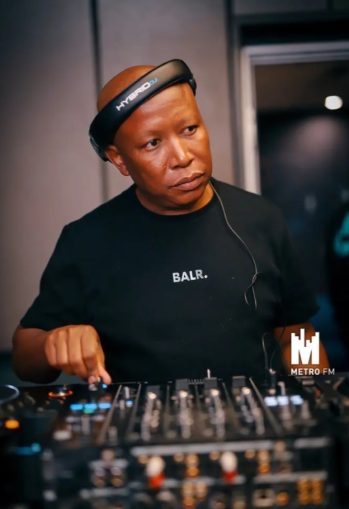 Malema has demonstrated his DJ abilities before, though. He created a stir in Soweto’s renowned Konka nightclub in November of last year.

The public was excited to hear Tbo Touch on the airwaves once more after his comeback to radio six years after his departure. One of the many people who greeted the radio host’s return to radio earlier this year was Julius Malema.

The EFF leader was a special guest on Tbo Touch’s show on June 24. The two immediately got into politics, Malema’s personal life, and even certain societal problems that South Africa is currently dealing with.

Malema has experience with radio; in July of last year, he appeared on Sizwe Dhlomo’s Kaya FM radio program.

At Mbuyiseni Ndlozi, a former spokesperson for the EFF and a member of parliamentgraduation ,’s celebration in 2017, Malema made his DJing debut. Ndlozi had just earned his PhD in Political Studies from Johannesburg’s University of Witwatersrand at the time.

During his visit to Metro FM, the EFF leader performed a DJ set, and it’s safe to say he shut it down! The politician’s playlist contained the popular song Dipatje Tsa Felo by amapiano sensation Felo Le Tee, which also features Myztro and Daliwonga.

“DJ CIC must start sending mixes to the radio stations,” wrote one tweep.