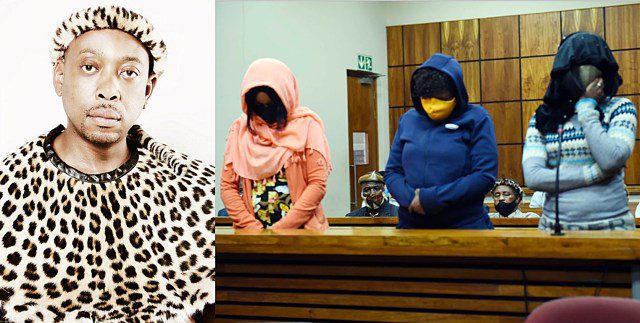 Members of the Zulu Royal House looked at each other in amazement as they heard the whispered words of one of the murder accused as she went down the steps to the holding cells.

The five accused in the murder case of Prince Lethukuthula Zulu appeared in the Randburg Magistrates Court yesterday, for the continuation of their bail application.

Through an affidavit by the investigating officer, the state said Margaret had also made a confession wherein she indicated they came to Randburg looking for money. The court heard how the accused operated.

“They’d normally go to a shebeen and wait for male persons,” said the affidavit.

“They’d approach the victims and ask them to take them to their houses. The person having s.e.x with the victim would then spike the drink with eye-gene.

They’d then steal cash and appliances.”

Tshegofatso took a microwave, Portia took a fleece blanket. Tshegofatso tried to wake the prince up, but without success.

They were then collected by their driver, Dakalo. The officer also said Tshegofatso changes her address around Pretoria regularly and visits her parents in Mahikeng once a year. The state said in a different matter, she has been served with summons to appear in a Pretoria Court for an assault case in March next year, although she said she was not a violent person.

The state said Margaret, who said she had no previous convictions, was convicted of a robbery in Pretoria and was sentenced to six months in jail in 2002. She has a pending case in Benoni for theft.