From the look of things, the battle between the South African controversial dancer and socialite, Zodwa Rebecca Libram and her ex-boyfriend Vusi Ngubane is far from over as Zodwa has taken the beef to the next level after she consulted the traditional doctors in an effort to ‘fix’ her former boyfriend in a traditional way. 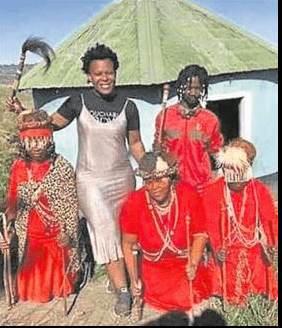 In a video seen by the local publication, Daily Sun, the dancer is seen swearing at Vusi as she seeks ways to revenge following their nasty break up a fortnight ago. However, upon seeing the video, another traditional doctor has blasted Zodwa Wabantu and furiously indicated that she did not do it the right way and bad luck is going to attack her sooner or later. ”It was wrong of her to carry ishoba”, he said.

The traditional doctor felt the socialite was disrespectful and ordered her to apologize for which she declined the request.

”She will think she is bewitched when everything turns ugly for her.Ishoba is given to a sangoma at a certain stage.If you haven’t reached that stage,don’t dare touch it.How much worse is it for an ordinary person who is not spiritually trained or connected.When you give it to someone,you are weakening yourself.And for someone to give it to you ,it will be back luck or even a curse”,she said.

Sangoma gave Zodwa a strong warning and advised her to avoid being stubborn and take her advice instead.

”She will wish she was dead when bad things start happening to her ,she has to apologize.That’s the only way she will be

ZODWA has disrespected izangoma and the ancestors.

This is according to angry sangoma Mtimande Ngwenya from Pomolong, Soweto.

“It was wrong of her to carry ishoba,” he said.

Zodwa is seen with four sangomas in a video.

She has ishoba in her hand and is swearing at her Ben 10, Vusi Buthelezi. Zodwa and Vusi recently had a nasty break-up.

Zodwa told Daily Sun she went to izangoma to sort out Vusi in the traditional way.

On seeing the video, izangoma felt Zodwa was being disrespectful and needed to apologise.

But Zodwa Wabantu, whose real name is Zodwa Libram, said izangoma should focus on their work.

“They should focus on healing people and not on me,” she said.

Sangoma Mtimande said Zodwa didn’t know what she was inviting into her life.

“She’ll think she’s bewitched when everything turns ugly for her,” said Mtimande.

“Ishoba is given to a sangoma at a certain stage. If you haven’t reached that stage, you don’t dare touch it.

“How much worse is it for an ordinary person who’s not even spiritual trained or connected.”

“A cow is slaughtered for you. Ishoba is made from a cow’s tail and made to protect and give you strength and connect you with your ancestors,” said Mtimande.

“When you give it to someone, you’re weakening yourself. And for someone to give it to you, it will be bad luck and even a curse.”

Sangoma Beauty Mabaso advised Zodwa to stop being stubborn and take their advice.

“She’ll wish she was dead when bad things start happening to her. She has to apologise,” she said.

“That’s the only way she’ll be forgiven by ancestors. Otherwise, a dark cloud is coming her way.”

Sangoma Maliyavuza Mtolo said she thinks just because she’s a celeb she can do as she pleases.

“That’s not how things work in our world. There’s no celebrity. Everyone is the same.

“We all respect the ancestors. If she doesn’t apologise by slaughtering a cow, she’ll regret the day she was born!”